Chosen as the European Capital of Culture in 2010, Istanbul is a unique place to be for Human Cities when you take into account the geographical location and cultural heritage. This growing megalopolis linking two continents, Europe and Asia, is a synthesis of cultural extremes, from the traditional Byzantine (eastern) and Ottoman (western) roots – to modernity. The creative energy generated by the young population has helped to create one of the most dynamic cities in the world. Into this stimulating context came “Human Cities Brussels-Istanbul 2010: Designing Public Space,” a project implemented by lead partner Pro Materia (Brussels, BE) in collaboration with ISTAV – İstanbul Sanat Ve Tanıtım Araştırma Vakfı (Istanbul, TR) and Recyclart (Brussels, BE). The EU supported this initiative with a grant scheme programme which is implemented under the coordination of the Istanbul 2010 European Capital of Culture Agency and CFCU as the contracting authority, in order to promote Civil Society Dialogue between Turkey and the EU in culture and the arts.
Human Cities Festival was held during Istanbul Design Week at the Old Galata Bridge. The project aimed at encouraging an interdisciplinary exchange between Istanbul and Brussels, as well as the other cities participating in Human Cities projects concerned with urban design and culture and their interactions with public spaces. Building on the theme of ‘Designing Public Space’, the partners explored the subject through various public events, lectures, installations and exhibitions taking place at Galata Bridge. Highlights included celebrated designers and guest speakers Satyendra Pakhalé, Patrick Jouin and Sanjit Manku, and sound artist Guy De Bièvre who, on behalf of Recyclart promoted Brussels with a joint interactive project ‘My Favorite Istanbul Sound’ in collaboration with Alper Turkkan from Yildiz Technical University Istanbul, culminating in a live concert and sound installation at the Old Galata Bridge.

More info you can find in a special edition of TL magazine: TL MAGAZINE istanbul 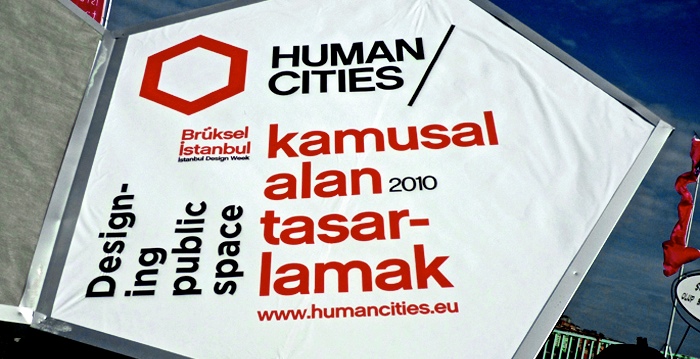