After her first gallery solo on Art On Paper in September 2018, Spazio Nobile is pleased to invite you to the vernissage of Amy Hilton, In-Between, solo show at Tour à Plomb, rue de l’Abattoir, 24, 1000 Brussels, from 24 October until 9 November 2019. You are warmly welcome to her vernissage on 23 October 2019, 17-21.00, in the framework of Brussels Drawing Week organized in parallel to Art On Paper. The exhibition is curated by Stéphane Roy, in collaboration with Spazio Nobile Gallery.

The Tower : standing vertically, in physical and spiritual ascension from earth to sky; as a symbol that links the two, between what is visible and invisible. This tower could not serve as a better metaphor to represent my ongoing research and artistic practice: where often ideas of sublimation and crystallization are accomplished in ‘uno actu’, in one single act. There is no sublimation without a deposit, and conversely there is no crystallization without a light vapor emanating from matter, without a spirit running along above earth.

The ‘uno actu’ of the existing tower at La Tour à Plomb and the intervention of the works to be exhibited allow us get in between thoughts and feelings towards uncovering certain fundamental truths. For me : to better understand that something within us rises up when some action penetrates deeper – and that also something penetrates deeper when something else rises up. As above so below; as without so within. We are the link between nature and the gods; we are the strongest link between earth and air. Such an expression is explored within my work exhibited here – where earth-air- water-fire-ether, are indissolubly linked. And it is this bond that allows for the sky’s mystical colours and forms, light and dark, to be transposed through the use of dry pastels, and for watercolours to flood across transparent paper in sedimentary, spiritual patterns. The terrestrial and aerial spirits that emit from the work serve to both heighten and deepen contemplation; to lock the viewer in a sort of meditation if only for a short time. Through ascensions in colour; golden glows and violet mists, through drawing invisible lines of connection, I hope to be able to stimulate an oneiric sensations to go beyond and in-between what on the surface may not immediately seem visible to the eye.

In an attempt to ‘spiritualize’ sheets of paper, a certain aura or glow appears, spreading feelings and energies that diffuse from the confines where it seems at first glance to be located. What is visible is not only a familiar outer light, but also a familiar inner light, born from the very center of my inner-self. This universal light engulfs and blurs. Little by little; it makes contours lose their sharp lines. It obliterates the picturesque in favor of the radiant. This should give a feeling of serene unity to the contemplative person. In this light, in these heights, with this consciousness of an aerial being, the physics of serenity can exist.
Following the discovery of a broken piece of stone in two separate parts six years ago, the notion of the ‘whole’ and the ‘parts’ has remained of profound and prime interrogation throughout my practice. The whole is indeed the sum of its parts, truly unique and always connected. The symbol of the one stone in two parts led to a deep ontological study, spanning philosophies of Eastern mysticism, Theosophical teachings and views on modern science, auras and energies and healing powers contained within inorganic matter. Observations on that very fracture, on that very space in-between the two parts and what is found in that space has become a significant interest. Working closely with fragments of marble in the last three years, I discovered a Neo-Confuscian concept : the li. And from this simple discovery arose the findings of one of the most powerful concepts in mankind’s attempt to understand the world around us :
‘The li is the ever-moving, ever-present set of patterns that flow through and in-between everything in nature and in all our perceptions of the world including our own consciousness.´

To everything that happens in-between.

For Taoist sages all phenomena in the world were part of the cosmic way – the Tao-  the laws followed by the Tao were not laid down by any divine lawgiver, but were inherent in nature. Thus :

“Man follows the laws of earth

Earth follows the laws of heaven;

Heaven follows the laws of the Tao;

Tao follows the laws of its intrinsic nature.” – Lao Tzu

The harmonious cooperation of all beings arose, not from the orders of a superior authority external to themselves, but from a fact that they were all parts in a hierarchy of wholes forming a cosmic pattern, and what they obeyed were internal dictates of their own natures.

The Chinese did not have a word corresponding to the classical western idea of ‘the law of nature’ . The term which comes closest to it is li, which the philosopher Chu Hsi described as ‘the innumerable vein-like patterns included in the Tao’ :

‘In its most ancient meaning, it signified pattern in things, the markings of jade, grains in wood or fibres in muscle.. it acquired the common dictionary meaning ‘principle’, but always concerned the undertone of ‘pattern’. ..There is ´law’ implicit in it, but this law to which parts of wholes have to confirm by virtue of their very existence as parts of wholes.. The most important thing about the parts is that they have to fit precisely into place with the other parts in the whole organism they compose…

..It is a natural and inescapable law of affairs and things. The meaning of ‘natural and inescapable ‘ is that (human) affairs and (natural) things are made just exactly to fit into place. The men of old,  investigating things to the utmost, and searching out li, wanted to elucidate the natural unescapeableness of (human) affairs and (natural) things, and this simply means that what they were looking for was all the exact places where things precisely fit together. Just that.’ – Ch’en Shun, pupil of Chu Hsi

What I found so profound about this concept was that it helps us to render spirituality more visible in a material world, bridging a gap between scientific and spiritual truths. Observing this idea of ‘in-between’, in the veins flowing through marble, or that moment of twilight just before the light turns to dark, we find a conserved energy space; a visible flow of energy in the patterns of the particle world. Spirit is at the heart of matter; and matter is the ensoulment of spirit.

The ancient Chinese, especially on the side of the Taoists, developed a unitary and organic conception of the living universe where everything connects. At the base of this original vision: the flow of breath.

Life is naturally expressed in pairs. The interaction of the yin and yang are of a certain familiarity to the Western spirt : of complimentary opposites. We know that the first embodies a gentle receptiveness, and the second an active power. Yang : sky and, yin : earth, yang : sun, and yin : moon, yang : mountain and yin: river ..

Based upon this preliminary understanding, we might be drawn towards the idea that Chinese maintained a dualistic thought. And, what we often forget is what lies in-between the complimentary opposites : the ‘Median Void’. The Median Void, drawing its power from the Original Void, intervenes whenever yin and yang are in presence. Three born of the two. Ideally, as a breath itself, it has the power of creating an invigorating and fertile space, bringing yin and yang into creative interaction.

The mountain and the river, for example, are not only two partners facing each other. They maintain a much more intimate relationship, a relationship of interbreeding, interpenetration, of mutual becoming. Thinking about how mountains ressemble  frozen waves .. And how water of the rivers  evaporate to the sky, turning into rain to then rehydrate the spring to nourish the mountain..

Then comes the notion of the ‘landscape feeling’ – referring to the interpenetration of the human spirit and the spirit of the world. A vision of the natural elements is of the same essence as the vision of the inner world of man.

The ‘in-between’ offers to those who know how to welcome it as an open dimension, a sense of transfiguration, an opening towards enlightened thoughts and feelings. 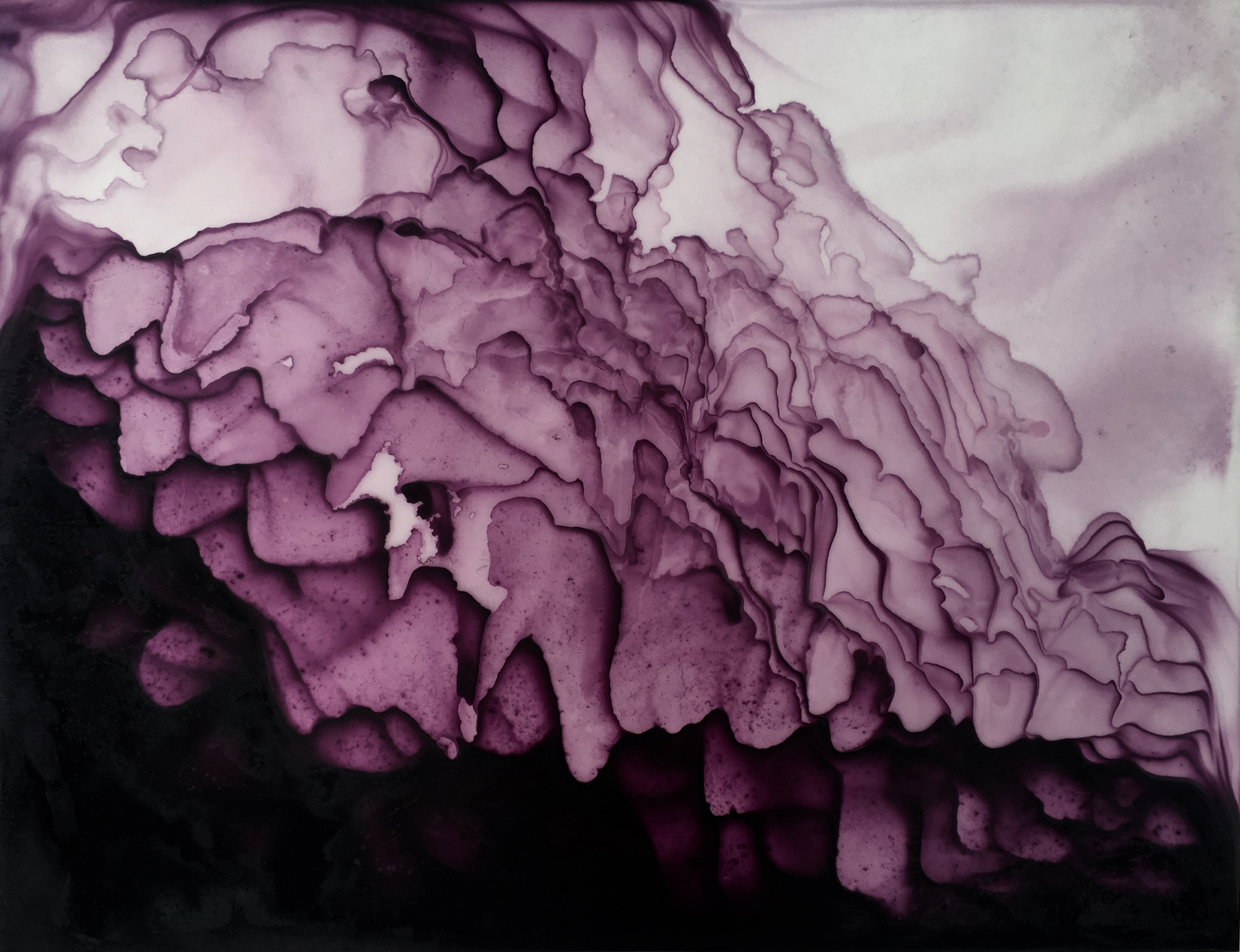