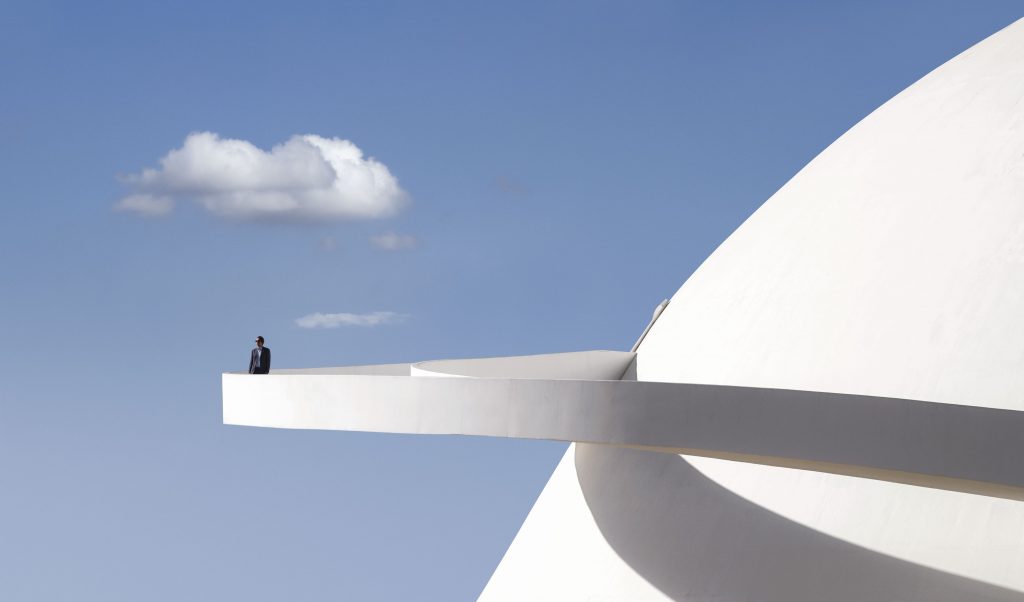 By appointment on the other exhibition days 10 photographs have been carefully selected by Vincent Fournier and Spazio Nobile which works in dialogue with the Modernist interior architecture of Atelier Jespers founded and run by Jean-François Declercq.

In this fictional mood of Brasília, states Vincent Fournier, “you feel like that you’re wandering in a life-size stage, where fiction mixes reality. It reminds me of the novel “Fiction” from Jorge Luis Borges where “the cartographers guilds struck a map of the empire whose size was that of the empire, and which coincided point for point with it. Everything is organized in a very mathematical way of seeing space, very abstract, like if the physical world would have been absorbed within a mathematical world. There is a contradiction in this as well. As a guiding concept, Oscar Niemeyer wanted to create a city that was meant to be shared, everyone in it together. But the opposite happened. Instead of drawing people closer, it separated them further away from each other.”

In 1987 Unesco listed the original 1957 urban plans of Brasília as a world heritage site. 30 years after the original design, the city has developed and would never meet the ideal plans. This selection by the Unesco Committee somehow turned Brasília into the most modern set of ruins in the world. The capital of Brazil as planned would always remain an utopia.

In his interview with Christian Larsen for TLmag #31, Vincent Fournier explains: “Brasília is very unique. It’s beautiful and fascinating how this city was designed with the same unified aesthetic. What rigor and madness! It is also a very special case since in just three years, the architect Oscar Niemeyer and the urban planner Lucio Costa, literally created this city in the middle of the desert, which, on the scale of the construction of a city, is instantaneous, like a photo that would immortalize a precise moment. The pilot plan of the city has thus remained unchanged, frozen in time due to its UNESCO World Heritage designation. Brasilia shows the nostalgia for the golden age of the future of the 60s. It is a modernist temple fossilized in a utopian future that did not take place. My interest in Brasilia also comes from my fascination with myths and stories that question and explore the future, from science to architecture, to technology. All my projects: space exploration, humanoid robots, the transformation of life through technology or even utopian architecture have in common to imagine the future in a historical perspective, as an archaeologist who dates different time strata. It may be the future of the past, or of a future very near, almost parallel to our present, or even of a possible future, a fantasized anticipation. The aesthetics and form of these “futuristic” worlds fascinate me, as do their way of rethinking the boundaries of the possible. I went to Brasília with this idea in mind. When I discovered the city with all those stilt-like columns, I photographed in horizontals only because I had this vision of a “walking city”: a city with legs. I framed the city this way, with a very cinematographic mood, just like a long sequence shoot… I’m playing with the balance of documentary style—with its distance, very frontal, very objective—but at the same time the images are carefully staged. They are composed of course, in a narrative and aesthetical way.”

Christian Larsen is Associate Curator of Modern Decorative Arts and Design at the Metropolitan Museum of Art.

The Metropolitan Museum of Art in New York has made the acquisition in 2016 of 5 large formats photographs from the Brasília series.

A book on this series of photographs, with contributions by Christian Larsen and Beatrice Galilee, Associate Curator of Architecture and Design at The Metropolitan Museum of Art, will be published by Noeve in Spring 2020.

Vincent Fournier is a French artist who explores significant mythologies of the future: space exploration, utopian architecture, artificial intelligence, living transformation… After being awarded a diploma in both sociology and visual arts, he studies at the National School of Photography in Arles and obtains his diploma in 1997. His works can be found in the permanent collections of the Metropolitan Museum of Art (MET) in New York, the Centre Pompidou Paris, the LVMH contemporary Art collection, the Dragonfly Collection in Massignac, the Museum of Fine Arts of Mâcon, Fondation Bullukian in Lyon, the ArtScience Museum in Dublin or the Baccarat Hotel Collection in New-York, among others.

By opening Spazio Nobile in April 2016, in the dynamic and cosmopolitan Ixelles neighbourhood of Brussels (Belgium), Lise Coirier and Gian Giuseppe Simeone have united their passions for design and art history, initiating a dialogue between contemporary applied arts, design and photography. Commissioning unique pieces, limited editions and installations that are both experimental and artistic, with a particular sensibility to everything nature and minerality, the gallery organises four to five exhibits each year, dedicated to both rising and established talents, without creating borders between the disciplines, the visual arts dialoguing with the fine arts. Spazio Nobile has been exhibiting Vincent Fournier since 2016 with his series “Space Project”, “Post Natural History”, and more recently “Brasília” and upcoming “Kintsugi” series to be launched at Collectible in Brussels and PAD Paris in March 2020.

Atelier Jespers has hosted in its public/private Modernist house renown designers and architects such as Domeau & Peres, Michael Anastassiades and architecture duo Berger & Berger. Major events of the Belgian cultural scene have happened there in the past 5 years. It has established itself as a key venue for Brussels artistic programming. The setting of the Modernist house built up in 1928 by Belgian architect Victor Bourgeois, member of the CIAM and first professor at the Architecture studio of La Cambre, provides to Atelier Jespers, the historical and aesthetic anchorage and an exceptional frame to welcome art & design, architecture and photography exhibitions.